About Those Shiny Red Kettles 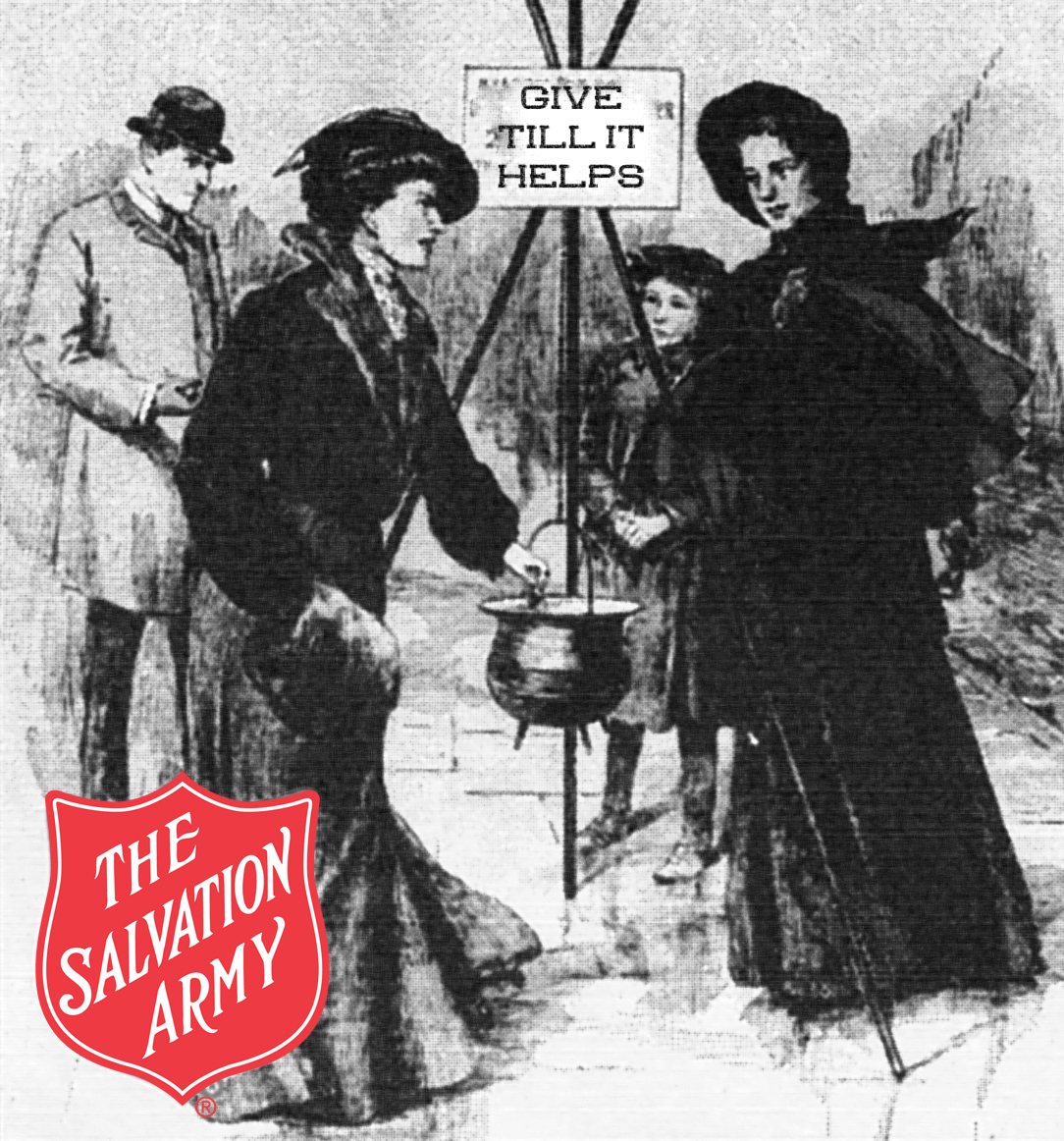 Back in 1891, Captain Joseph McFee, a Salvation Army officer serving in San Francisco, was reminded daily of the teeming numbers of poor and hungry on the streets. It was December; the weather was turning and Christmas was just around the corner.  He fervently wanted to provide 1,000 nourishing Christmas meals to those in the greatest need.  The question was, “How was he going to pay for it?” He thought long and hard and prayed on it. Finally, he had his “Eureka!” moment. Recalling his days as a young sailor in Liverpool, England, he remembered seeing “Simpson’s Pot” on the Stage Landing by the harbor. This was a large pot which accepted donations from the myriad of passers-by at the landing.  The following morning, Captain McFee hoofed down to San Francisco’s city offices, where he secured permission to place a similar pot at the Oakland Ferry Landing, along the foot of Market Street. It was a crab pot hung from a tripod and Captain McFee was heard from far and wide bellowing, “Keep the Pot Boiling!” Donations rolled in, filled the pot and the Christmas dinner wishes were fulfilled.

The concept caught on and by 1895, there were 30 kettle locations along the West Coast, raising funds for The Salvation Army’s efforts to serve the poor. Two young Salvation Army officers, William A. McIntyre and N.J. Lewis, who had been instrumental in the original kettle collection days, were transferred out East where they took the kettle concept along with them. In Boston, Captain McIntyre prepared his Christmas plans around the kettle and shared them with his fellow officers. None of the other officers would take up the cause for fear of “making a spectacle of themselves”.  McIntyre, undaunted, garnered the assistance of his wife and sister. They posted three kettles along Washington Street – Boston’s main shopping thoroughfare, in the heart of the city. That year, through all the kettle efforts nationwide, 150,000 Christmas dinners were served to the needy by The Salvation Army.

In 1898, the New York World hailed The Salvation Army kettles as “the newest and most novel device for collecting money”. In 1901, New York City kettle collections provided for the first mammoth sit-down dinner at Madison Square Garden – a custom which followed for many years thereafter.

Today, those kettle donations not only provide food and modest gifts to five million people at the holidays, but also other services throughout the year, such as:

The Salvation Army’s Christmas kettles are now found all over the world – distant lands such as Korea, Japan, Chile and many European countries. Although changed from the utilitarian crab pot on Market Street, The Salvation Army continues to ring those bells by their shiny red kettles, accepting the generosity of the members of our community who “give till it helps”.

We would love to hear about your experience with The Salvation Army.